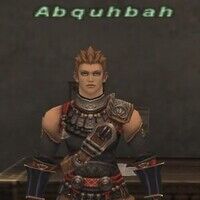 Abquhbah is the assistant of Naja Salaheem and the NPC who coordinates mercenary affairs. Ask him for your actual progress for the next Rank Promotion. - "How often did he meet Naja's spiky friend? Hmmmm?"

Mercenaries
A Mercenary is a character, who lives at the mercy of President Naja...
Salaheem's Sentinel
The only mercenary group with direct authorization of the Empress herself. Company flyer of Naja says all: "Super dooper, the best of the East"
The Commissions Agency
Agency for the Assault Missions; introduce yourself for more information
Salary
Imperial Standing for credits

This is the most important option that Abquahbah offers. You are told indirectly how many Assaults you will need until your next Mercenary Rank promotion. As you progress, you will receive the following dialogue (in order starting with fewest missions completed):

When you are able to rank up, you will be told:

After getting Promotion Quest, Abquhbah will tell you:

Strange and maybe hidden feature at later ranks; he refuses to speak with you about that topic until you get Corporal Rank.


Once you reach the rank of Corporal, Abquhbah will begin offering information regarding President Naja.