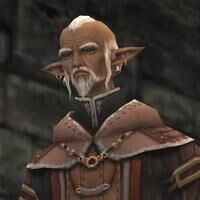 Despachiaire is an elder of Tavnazia who has helped unify the survivors of the Safehold. A devout follower of Altana, he was once employed as a trader for the church. Despachiaire's son was lost in the war, making his granddaughter, Ulmia, the sole recipient of his doting affection.

Retrieved from "https://classicffxi.fandom.com/wiki/Despachiaire?oldid=27409"
Community content is available under CC-BY-SA unless otherwise noted.