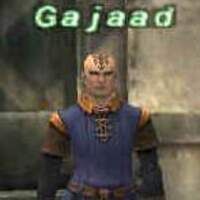 An NPC looking for signatures and donations of imperial currency to rebuild Al Zahbi.

If Chochoroon has been kidnapped during Besieged, you won't be able to trade Imperial Bronze Pieces to Gajaad.

Important Note: Any Imperial Bronze Piece traded to Gajaad will strengthen Imperial defense and influence the number of NPC volunteer/Immortals that help in Besieged. Underneath an excerpt copied from Allakhazam.com. See discussion for more information on this research.

The cap on the Imperial defense value is 200, separated into two parts: hired mercenaries (120 defense) and NPC representatives (80 defense). The 10 merchant NPCs outside of Besieged account for 8 defense each. The 5 generals seem to have no effect on the Imperial defense. The Imperial defense value can be raised by donating bronzepieces to Gajaad in Al Zahbi, the Walahra Turban NPC. Gajaad will accept coins even after you've obtained a turban. Gajaad will not accept donations if the appraisal NPC, Chochoroon, is a prisoner. Every 5 bronzepieces raises the defense value by 1 point up to the 120-point mercenary cap. There seems to be no limit to the number of times any one person can trade coins for defense. Merchant NPCs affect the presence of Volunteers and Immortals in Besieged. Donations affect the presence of Qiqirns, goblins and members of the Imperial army.

Retrieved from "https://classicffxi.fandom.com/wiki/Gajaad?oldid=26866"
Community content is available under CC-BY-SA unless otherwise noted.