This guide is a work in progress. If you feel you have worthwhile information that should be added, please do so or DM me Spiffly via the link or on Discord

Welcome to FFXI and Eden! If you rolled your character in Windurst, this is the place learn how to make gil, in and around it's starting areas.

Farming is the simplest way of making gil in FFXI. If you aren't already familiar with the term, it involves killing mobs (monsters) and in turn selling the items they drop. You will find youself killing monsters for experience and their loot in the starter zones of East Sarutabaruta, West Sarutabaruta, Giddeus and Outer Horutoto Ruins. Make sure you always speak to a gate guard before leaving town and ask for Signet. With signet, you will be eligible to receive crystals from mobs and also earn Conquest Points. Below is a list of mobs that i recommend you targeted and the loot they drop which can typically be turned into the best profit.

Gardening requires some gil to get it off the ground and running. Thankfully, the amount is quite small, even for new players and pays for itself exponentially. Please refer to this gardening guide for further information.

Fishing is a hobby that players can participate and level up in, similar to that of crafting. Whilst it is very in depth and takes a lot of time and effort to progress into the higher levels, it's fairly straight forward for new players to try it out. 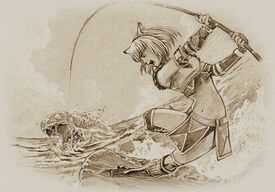 There are 2 things you will need

As a citizen of Windurst, you can purchase a fishing rod from Babubu in Port Windurst, (C-8), at the fishing guild. Being the guild, they sell many types of rod however, you will be targeting Moat Carp and not all rods are suitable for them. Look to purchase either a Bamboo Fishing Rod, a Willow Fishing Rod or a Yew Fishing Rod. These are all relatively cheap and obtainable for a new player.

Next you will need some bait. I would recomend you vist the Auction House and purchase a stack of 99 Insect Balls. They will typically cost you 2-3k however, they allow you to isolate moat carps when you fish, ultimately catch more of them and make more gil. An alternative bait would be Little Worms. Babubu will also sell these and they cost 297 gil for a stack of 99.

The last thing to fishing is location. As a new player, you are limited to Windurst Waters, Windurst Woods, Windurst Walls, East Sarutabaruta and West Sarutabaruta however as you progress, more areas will open up to you. For more information on how the fishing mini-game actually works, please see here. It's fairly self-explanatory but i would recommend reading up to reduce the chance of things such as breaking your fishing rod.

As the name suggests, these monsters are tougher than regular mobs they appear amongst. Players starting in Windurst have the luxury of a couple that they can seek out, kill and hopefully loot. Make sure to read up on each of these monsters before attempting them, ensuring your best chance of success.

Finally, a bonus NM. This one doesn't drop anything of sellable value but it does drop a Club which is the Best in Slot (BiS) for mages all the way up to level 51 and is well worth the effort of acquiring.
<br

Harvesting is a hobby in FFXI where players use Sickles to harvest plants. It's a simple process that only requires a small amount of gil to try. Purchase a sickle and 'use' it on a harvesting point. Each use has a chance of obtaining an item but beware, your sickle may also break! When you have made enough gil, i would strongly recommend investing in the Field Tunica Set. Whilst expensive, it will reduced the rate at which sickles break and ultimtely pays for itself.

How to Sell your Loot

There are 3 main ways that players can sell their loot in FFXI:

The Auction House (AH) is the marketplace for FFXI's players. It has it's own guide which can be found here.

Most items across Vana'diel can be sold to NPC merchant vendors. Whilst you can usually make more money via the Auction House, not all items sell very often. Some items are better just sold to the NPC. Some items may even sell for more than the AH price!

If you would like to know more about the author, you can find my wikipedia user profile here. Thanks for reading and i hope my guide has been useful to you.

Retrieved from "https://classicffxi.fandom.com/wiki/How_to_Make_Gil_as_a_New_Player_from_Windurst?oldid=29255"
Community content is available under CC-BY-SA unless otherwise noted.