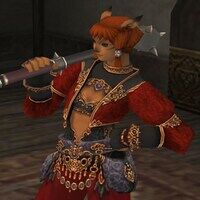 Primary NPC for the Treasures of Aht Urhgan Missions. She is the President of the Mercenaries Group. Her duty is to get currency, currency and maybe your own mission rewards. Her "spiky friend" reminds you when you fail at your tasks. Don't be lazy and work hard for your Mercenary Ranks, and maybe you will be promoted. Don't forget the first Mercenary rule: Doing, not asking - Naja is the leader.

Note that Rank 2 for San d'Orians or advancement to Mission 2-3 for Windurstians and Bastokers is required to enter the Chateau d'Oraguille. 5 of the NPCs for Lure of the Wildcat quest are there, and thus access to it is required to get the Mythril piece as a reward.

Retrieved from "https://classicffxi.fandom.com/wiki/Naja_Salaheem?oldid=26476"
Community content is available under CC-BY-SA unless otherwise noted.