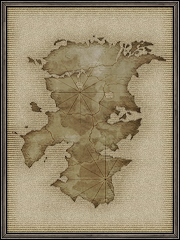 The largest continent of Vana'diel. Climates vary from the frigid cold of the northern glaciers to the sweltering heat of the southern deserts. This land has an abundance of plant and animal life, and a large variety of mammals make Quon their home. The Quon continent is populated by the Hume, Elvaan, and Galka races at a ratio of 6:3:1. The main nations are the Elvaan Kingdom of San d'Oria, situated in the central northern forest belt; the southern Hume Republic of Bastok, surrounded by mountains and desert; and the Hume-governed Duchy of Jeuno, built upon the bridges that connect Quon to the continent of Mindartia.

The staple food of San d'Oria is wheat, while Bastok relies on harvesting rye and popotoes. Many regions also herd giant sheep as livestock.

The advance troops of the Orcish Empire to the north and the stronghold of the Quadav in the swamplands to the east comprise the two main beastmen powers on the continent.

Retrieved from "https://classicffxi.fandom.com/wiki/Quon?oldid=29638"
Community content is available under CC-BY-SA unless otherwise noted.