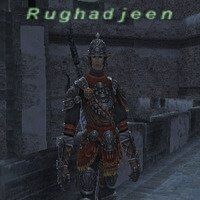 Rughadjeen is one of 5 generals defending Al Zahbi during Besieged. He holds the title Skyserpent General, the leader of the 5 Serpent Generals, and is an Elvaan Paladin. Rughadjeen's double bladed sword is an Algol, and it is rumored the very same Algol that was once wielded by the great hero Balrahn.

If he is not held prisoner at the beginning of a Besieged, everybody will receive 1 Carnal Incense, Fanatic's Drink, and Braver's Drink.

His name may be derived from the Arabic word, Mujahideen (مجاهدين), meaning "strugglers." Considering his job, it befits him.

Retrieved from "https://classicffxi.fandom.com/wiki/Rughadjeen?oldid=27055"
Community content is available under CC-BY-SA unless otherwise noted.