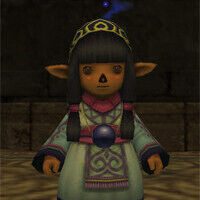 The Star Sibyl is the formal name given to the Tarutaru leader of Windurst. She resides in the Vestal Chamber in the Heavens Tower. The current Star Sibyl, has been in power since before the Crystal War. The only ones allowed to see her are her body guards, her vassals, the Ministers of Magic, members of the Parliament of Patriarchs, and high ranking adventurers. She did, however, make one public appearance in the years following the Crystal War, where she urged her people to maintain a peaceful relationship with the Yagudo and to never use Summoning Magic again. She has complete trust in Semih Lafihna, her personal Patriarch Protector. The Star Sibyl is blessed with the ability to read the stars in order to predict future events. She is not a character of many words, yet those words she utters are heartfelt.

The Star Sibyl is more than a political leader, she is concidered the physical reincarnation of Altana in the Tarutaru religion. After the current Star Sibyl dies, female children are searched to find her new body and that child is taken and raised by the Heavens Tower nuns. Celibacy is expected of her vassals and, minus government officials, men are kept at a guarded distance from Her Holiness on a day-to-day basis. A notable exception was Karaha-Baruha, an adviser she relied heavily on during the Crystal War whose death struck her especially hard.

Her real name may be Miratete, as suggested by the item Miratete's Memoirs.